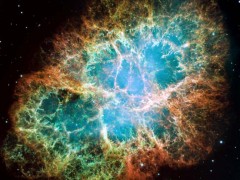 On April 12th, 2011, the Crab Nebula emitted a gamma ray flare lasting six days that was five times more intense than any of the others that were previously observed and 30 times brighter than the nebula’s normal gamma ray intensity.  On April 16th an even brighter flare occurred but faded out over a period of two days.  This new evidence, which perplexes astronomers, is easily explained if the Crab Nebula’s unusually strong synchrotron emission does not originate from its associated neutron star but from a volley of galactic cosmic rays striking it face on.  For more on this visit our superwave forum at:
https://starburstfound.org/superwaveblog/.