High-velocity outflows from the GC, or a misinterpretation? 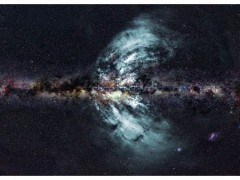 For more on this story visit the Starburst Superwave Forum