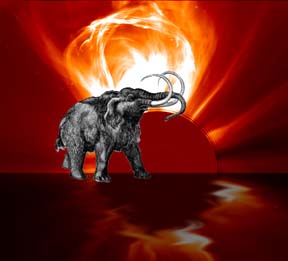 Now, however, a group of 26 scientists, led by Lawrence Berkeley Lab scientist Richard Firestone and geologist Alan West, has found evidence that high levels of extraterrestrial material are present at the 12,900 year old Younger Dryas mass extinction boundary, thus confirming LaViolette's 24 year old prediction. As described in their paper in the October 9th issue of the Proceedings of the National Academy of Sciences, the Firestone- West "Younger Dryas boundary (YDB) group" found high concentrations of iridium, nickel, tektites, fullerenes, nanodiamonds, and helium-3 at this boundary, a date that also marked the end of the two-millennium-long megafaunal extinction episode (Firestone, et al., 2007). In particular, part of the YDB group (Darrah, et al., 1977) reported that magnetic separates from the YD boundary contained high levels of tin and copper, thereby corroborating LaViolette's earlier conclusion that the tin he had found was of cometary dust origin and evidence of a past superwave passage.

Firestone et al. propose that a comet at least several kilometers in diameter had impacted the North American ice sheet or fragmented and exploded in the atmosphere and that its fireball induced a global firestorm followed by glacial meltwater flooding. They propose that these events together with the initial shock wave and release of noxious gases were a chief cause of the megafaunal extinction. LaViolette's prediction that high concentrations of cosmic dust should be found in the interval spanning the 13 thousand year old Younger Dryas transition boundary emphasized more the idea of enhanced cometary dust deposition, although the notion of a comet impact occurring at this time is also compatible with his theory which projected an increased influx of comets and meteors during this time.

However, LaViolette believes that the comet impact was not a main cause of the extinction. His theory proposed a more extended die-off episode climaxing with a particul arly large solar flare and associated episodes of global conflagration and glacial meltwater flooding. This scenario later received strong support from discoveries that this period was marked by a 700 year rise in radiocarbon concentration, an indicator of elevated solar activity, as well as by an extended increase in atmospheric beryllium-10 production, an indicator that Galactic cosmic ray intensity had been elevated at that time. LaViolette points out that a Younger Dryas boundary comet impact does not account for such effects.

In their book and earlier conference presentations, Firestone and West proposed that this impacting comet originated from a supernova explosion about 250 light years away that took place about 41,000 years ago and that the comet was part of the supernova's high-velocity remnant shell that was passing through the solar system at that time. LaViolette, however, takes exception to this supernova theory.  In his paper "The cause of the megafaunal extinction: Supernova or Galactic core outburst?" he presents 22 major problems with the Firestone-West theory, some of which include: