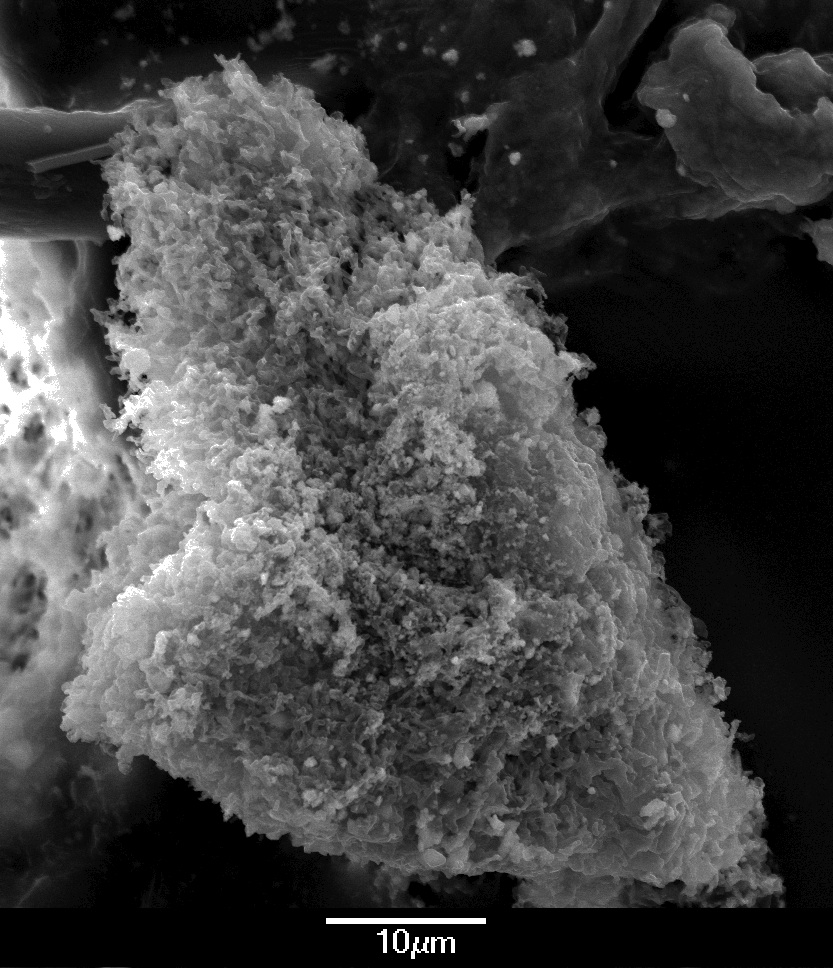 Samples retrieved from the ice age portion of the Camp Century, Greenland ice core show evidence that a major cosmic dust incursion episode occurred 49,000 years ago, the largest to occur in the past several hundred thousand years. Dr. Paul LaViolette, director of the Starburst Foundation, a New York based research institute, has found that over a period of at least 6 years, interstellar dust was entering the Earth's atmosphere at up to 100,000 times that of the current cosmic dust influx rate. He presents this discovery in a paper that that is appearing in the December 1st issue of Advances in Space Research (https://www.sciencedirect.com/science/article/pii/S0273117715006614).

What is unusual is that the composition of this dust does not match any hitherto known cosmic dust sources, for over half of the sample dust weight consists of tin and lead (49% tin and 8.4% lead). LaViolette finds that this heavy-metal-rich dust is most likely of interstellar origin since its lead-to-tin ratio matches that seen in spectroscopic studies of the nearby interstellar medium and makes a very poor match to the lead-tin ratio found in solar system dust and meteorites.

Equally interesting is the mechanism that LaViolette has proposed to explain the concentration and conveyance of this dust to the solar system. Even in interstellar space, tin and lead are believed to be present in relatively low cosmic abundances, on the order of a few parts per million. So LaViolette needed to explain how these elements came to be preferentially concentrated by a hundred thousand fold. One day the thought occurred to him that tin in its metallic state is superconducting at temperatures typically found in interstellar space and that superconductors are repelled by external magnetic fields through what is called the Meissner effect. A similar Meissner repulsion effect is used in levitating maglev trains. He theorized that propagating interstellar shocks having embedded magnetic fields would have tended to preferentially push these particles forward and in so doing cull them out from all the other dust that was not superconducting. This same mechanism could also explain the high concentrations of lead found in this sample since lead is another metal that is superconducting at interstellar temperatures. While the tin particles were found in their oxide form due to their long exposure to Earth's oxidizing environment, they would originally have been in their metallic state when present in the hydrogen-rich space environment.

LaViolette found that during the course of the 49 kyrs BP event the concentration of terrestrial wind blown dust present in Camp Century ice had decreased 33 fold, implying that the rate of ice accumulation had correspondingly increased 33 fold, perhaps reaching levels as high as 5 meters per year. This event occurred near the beginning of a climatic cooling episode known as Dansgaard-Oeschger stadial number 13 and was likely the cause of this global climatic cooling. This shows that cosmic dust influx into the solar system may play a key role in climatic change.

The high lead levels that were found in the tin-rich dust sample suggests that hazardous lead levels were present in snow and rain water that fell at that time. Lead was at over 10 times the maximum allowable threshold set by the U.S. EPA and could have posed a health hazard if such contaminated water had been consumed by wildlife or paleohumans.

LaViolette's scanning electron microscope results are also interesting. One tin oxide particle was found to have a length of 120 μm making it the largest monomineralic cosmic dust particle thus far reported. Also particles were imaged which had a porous aggregates morphology, some being embedded with numerous nanospheres similar to nanochondrules or GEMs found in cosmic dust particles.

The tin-rich sample was also found to contain very high levels of low melting point elements such as antimony, silver, and gold. In fact, this was the first time that anyone had detected gold in polar ice. LaViolette also found high levels of tin and lead (39% tin, 7.5% lead) in a 130,000 year old Camp Century polar ice dust sample. Again the lead-tin ratio conformed to that found in interstellar space. This indicates that Earth has had a history of recurrent incursions of tin-rich interstellar dust.

LaViolette began investigating these polar ice dust samples over 35 years ago as part of his Ph.D. research at the Portland State University Systems Science program. His dissertation was researching the hypothesis that intense Galactic cosmic ray particle volleys pass through the solar vicinity every 10 to 25 thousand years pushing nearby cosmic dust into the solar system. To test this "Galactic superwave" theory he analyzed a total of eight Camp Century ice core samples for the presence of 15 trace elements, among these iridium and nickel which were good indicators for the presence of cosmic dust. He chose samples from the ice age portion of the ice core with ages ranging from 40,200 to 78,200 years BP and analyzed them using a technique called neutron activation analysis. He found that five out of the eight samples had elevated levels of iridium and nickel, thereby confirming his hypothesis that the solar system is occasionally flooded with particles of cosmic dust. The sample having the highest levels of iridium was the anomalous tin-rich sample.

These results were surprising to most cosmochemists and astronomers since the idea of cosmic dust incursions recurring in geologically recent times was virtually unknown at that time. While he was able to publish his iridium and nickel findings in 1985, his findings on the tin-rich dust were met with skepticism due to the unusual composition of the sample. Repeated attempts to publish those findings were routinely blocked by journal referees who claimed that the high levels of tin were due to contamination that had somehow entered the samples.

Five of the eight samples that LaViolette analyzed had been previously filtered from ice samples processed by glaciologist Lonnie Thompson in a class 100 clean room and the tin-rich sample was one of these. So the sample contamination claim did not seem very convincing. Thompson had previously reported high levels of tin in both ice age tin-rich samples, but had attributed the presence of tin to bedrock scrapings that had somehow worked their way up through the ice. But, LaViolette's discovery of high levels of iridium, nickel, and gold in the 49 kyrs BP sample indicated an extraterrestrial origin for the tin as being far more likely.

The rejections of his paper did not deter LaViolette. Over the years he continued to resubmit his results to one journal after another, being rejected by a total of 10 different journals. Over time, the amount of evidence he had accumulated to support his cosmic origin hypothesis continued to grow. For example, in 1984 he sent a fragment of his tin dust sample to professor John deLaeter an Australian mass spectroscopist who was then the world expert on the isotopic analysis of tin and who shortly before had made a break through in measuring tin isotope ratios. Interestingly, deLaeter found that three of the ten isotopes of tin had significant isotopic anomalies. This was a clear indication that the tin was of extraterrestrial origin since anomalous isotope ratios are primarily found in extraterrestrial material which has been subject to cosmic ray bombardment in space.

At that time this was the first such detection of an isotopic anomaly of tin, although it remained unpublished. Even with this isotopic evidence referees still remained skeptical since tin is not observed in such high quantities in meteorites or in most cosmic dust particles captured from the stratosphere, and they could not conceive how tin could have achieved such high levels in an extraterrestrial source. Unless LaViolette could come up with a good explanation, his paper would not see the light of day.

In 2010, he updated his manuscript to suggest the idea that these particles in their metallic state would have been superconducting in interstellar space and could have been concentrated by propagating magnetic fields.  Journal reviewers still were not sufficiently convinced.  Then in January of this year, while his paper was still under review by the journal Advances in Space Research, he arranged to redo the energy dispersive X-ray analysis on the tin-rich samples with the help of staff at Rensselaer Polytechnic University.  This new study found that one of the energy peaks which had previously been misidentified in 1984 as a sulfur peak was instead a lead peak.  Moreover these new more accurate results showed that the abundance ratio of lead to tin approximated very closely to lead-tin abundance ratio observed in interstellar space.  The discovery of lead also further strengthened his superconducting particle scenario since metallic lead, like tin, would be superconducting in the cold environment of interstellar space.  In addition, many new scanning electron microscope images were made and some showed tin-lead-rich particles having a morphology similar to porous aggregate cosmic dust particles, hence providing further evidence for a cosmic origin of the tin and lead.

Moreover in 2014 another research group at Lamont-Doherty Geological Observatory began confirming the presence of high concentrations of tin in polar ice.  They reported finding tin-rich particles in 1500 year old ice samples retrieved from the GISP2 Greenland ice core and finding these to be present along with elevated concentrations of nickel and cosmic microspheres concluded that the tin had a possible cometary origin.  So together with all the new evidence that LaViolette was able to amass, suspicions that these tin-rich particles were ice core contamination seemed to become increasingly remote.  LaViolette’s findings were finally taken seriously and after 31 years accepted for publication.