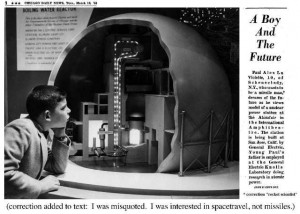 As a result of this exposure, at an early age I was thinking in terms of process. Such thinking is just as fundamental to nuclear physics, as it is in subquantum kinetics, the physics theory I was to later develop. In nuclear physics you have atoms and particles diffusing, interacting and transmuting, whereas in subquantum kinetics you have etherons (subquantum particle-like entities) diffusing, reacting, and transmuting. The concepts are the same; they are just brought one step down from the nuclear or subatomic particle level to the sub-subatomic level, the level that has been variously referred to as the aether or the material vacuum. In my early youth, I was exercising this process thinking by inventing and sketching conveyor belt assembly line processes where a product would continually change and modify as various automated operations were performed on it. The third grade class visit to the local milk bottling plant with its automated conveyor belt operation offered further stimulation.

My mother had served as a research chemist at duPont during the early 40's and my father had worked there as well doing electrochemical engineering. So, I was honored with the privilege of receiving early guidance enabling me to acquire an understanding of chemical processes as well as nuclear processes. The chemistry set that my parents gave me for Christmas in those early years, further helped me along the road of thinking in terms of chemical reactions and chemical processes, at a time when I was also able to think in terms of processes taking place at the nuclear level. My entry into chemistry blossomed into a full blown hobby in which I was ordering my own chemicals and laboratory equipment from a major chemical supply house. I became particularly fascinated with exothermic reactions. Following gunpowder recipes given in a nineteenth century farmer's recipe book that belonged to my father, I launched myself into a four-year career of rocketry and pyrotechnics. I drew on this background later in developing subquantum kinetics. I took kinetic equations that chemists used for representing chemical reactions and modified them to represent ether reactions. One example is the following step from the Brusselator reaction system: 2X + Y ----» 3X. I used the same symbols, but just changed what they represented. Instead of representing chemical processes, I now made them represent etheric processes.

During my early years, I learned from my father the process of abstract thinking, and of thinking clearly and conceptually about physical phenomena. We both shared the trait of being curious about nature, of wanting to explore the unknown. My mother also was an important influence. From her I learned to be an independent thinker, to not be afraid of being different from others. Following her example, I acquired the courage to fight, to stick to my ideas even if they were challenging mainstream thinking. My uncle also had an influence on me in my early years. He was an aerospace engineer who in his early career was involved in designing rockets and missiles. He also did pioneering research on ultrasound and developed the first twisted ribbon FM accelerometer, a version of which was later used to accurately measure the force of gravity on the Moon, an accomplishment duly noted on a plaque in the Smithsonian Air and Space Museum in Washington, D.C. My father, with several patents to his name, was also of an inventive nature. When my uncle visited, the two of them would toss ideas around and the conversation would get particularly interesting. Listening to them greatly influenced me and stimulated me to draw up my own inventions of sorts. I can trace my own interests to invent and think creatively back to these early efforts to emulate them. This helped me develop the ability to make connections and associations that were out of the ordinary. Basically, I lived in a future oriented family that was working on projects and ideas that were to bring humanity into the next technological generation.

If I were to recount specific events along my path that led to my formulation of subquantum kinetics, the first one that stands out is the mystical experience I had in my college dorm in the spring of 1967 while in my junior year at Johns Hopkins University going for my BA in physics. As I have described in the prolog to my book Genesis of the Cosmos, in that experience I seemed to be receiving information telepathically from higher intelligences, relating specifically to the fundamental nature of existence. Namely, I was being instructed that Nature at its most fundamental level is in a state of flux and that what we call things or structures are simply steady-state patterns in that flux. Clearly, my past childhood training in process thinking, in understanding chemical and nuclear processes as well as factory production processes, was instrumental to making me a receptive pupil to faintly hear and understand these silent "voices" from within.

This experience launched me on a philosophical quest that was to last years and in which I attempted to clarify and develop what I came to call "my theory of existence." In essence I was developing a theory of natural systems. I was finding that by means of a set of simple concepts it was possible to explain phenomena on many scales of Nature and that there was a vast hierarchy where systems were nested within systems within systems. Organized entities such as a cell, a living organism, a solar system, or whatever, I would term "time-stable systems," meaning that they persisted over time as organized entities or systems because their particular order was being repeatedly recreated from the underlying flux of events that were taking place. In the case of a solar system, this repeating event, of course, would be the circular orbital motion of the planet. Only later would I discover that process thinkers such as Alfred North Whitehead and others had followed similar paths of introspection.

This all was new to me, for it was not taught in any university course that I had encountered. It would not be until the spring of 1973 while studying for my MBA at the University of Chicago that I would discover the discipline called general system theory. I found that other academics as well, such as Ludwig von Bertalanffy, Kenneth Boulding, Floyd Allport, Ervin Laszlo, Ralph Gerard, and Whitehead, had themselves converged on similar ideas. In previous years, general system theory had a substantial impact on the field of business administration, revolutionizing the way administrators would view a company or corporation. This explains why I encountered all this in a business course on organizational psychology. At about the same time I also encountered the works of Ilya Prigogine on the behavior of certain types of open chemical reaction-diffusion systems which have the ability to create chemical concentration patterns termed dissipative structures. I then also encountered the research of Arthur Winfree on the Belousov-Zhabotinskii reaction and its ability to create chemical wave patterns. I was also concurrently reading a paper by Albert Einstein which related his belief that particles were not point-like singularities in space, but rather diffuse structures which he termed "bunched fields."

It was within this coincident nexus of ideas that I had a memorable "Aha" experience in which I realized that subatomic particles might also be dissipative structures, concentration patterns forming in an underlying medium that engaged in reaction-diffusion processes. These, I realized, were the bunched fields that Einstein was talking about. But I was able to understand how they formed, how they emerged, and how they maintained themselves. I realized that subatomic particles would form as distinct structures in much the same way that chemical waves would form in the Belousov-Zhabotinskii reaction. In both cases a structure, whether it be a subatomic particle or chemical wave, would form was the direct result of an underlying flux, one that consisted of ongoing reaction and diffusion processes. In the case of chemical waves, these underlying processes were occurring between molecules. But to bring similar ideas down to the subquantum level to explain the formation of quantum level structures such as subatomic particles, one had to postulate the existence of a totally different substrate, one filling all space yet invisible to direct detection. Hence were conceived the rudiments of the theory of subquantum kinetics. Although I initially envisioned these underlying processes in terms of interacting field potentials, I later replaced this notion with the idea of a transmuting ether consisting of interacting "etherons". All the long training of my childhood and youth, of learning to visualize chemical reaction processes and nuclear reaction processes, came to fruition here. With this experience I was now envisioning ether reaction processes and diffusion processes.

These ideas were completely foreign to what was being taught in college physics, which instead conceived subatomic particles as being structures having an independent existence and not anticipating that any underlying flux or process might be needed to maintain them. I saw this as an entirely new development in theoretical physics. It was very late in the night when I had this realization. But it was so important that I felt I must share it with someone. So I called up my father. It was a night he well remembered. I will tell the story in my father's own words as he related it earlier this year to my mother's AAUW group (American Association of University Women) where he was presenting a lecture about subquantum kinetics (his favorite subject). The following is quoted from Fred's lecture notes:

One night in 1973 I was awakened by the incessant ringing of the telephone. It was Paul calling at 3:00 AM from Chicago. In an excited voice he was saying, "If I don't live until morning, you should know about this!" This woke me up in a hurry to say: "What happened? Were you in an accident?" He said, "No, I'm alright. It's just that I have made a great discovery in physics." I said, "Well! Go back to bed and call me when I've had a good nights sleep and have recovered from this shock."

I remember that it was indeed a thrilling experience. I was awake all that night, and my sleep schedule was turned topsy turvy for the next few days. I was sleeping during the day and working during the night. Walking across campus I could sense this etheric flux in all things, in the trees, in the rocks, everything seemed to be patterns formed in this vibrant flux. I was sensing everywhere Nature's kundalini.