As in nature, it is not just the seed that matters in the germination and growth of a new sprout, but also the soil, the seed's environment. If the soil is not fertile and periodically saturated with water, the sprout will eventually wither and die. This too is the reality of how all great ideas are developed. We are all familiar with the life of Amadeus Mozart and the great supporting role his father played in the early flowering of Mozart's career. Were it not for the fertile environment that Amadeus's father provided perhaps the life of this gifted young composer would have taken a different turn and we would not today be enjoying the many sonatas and symphonies that Mozart produced.

Subquantum kinetics, today at least, certainly is not as widely known as Mozart's works. But what was true of Mozart's creative life was also true of mine. The fertile environment that both my parents provided, and in particular the early mentorship my father gave me, played an essential role in my ultimate development of subquantum kinetics. Below I will summarize how this unique family experience helped to facilitate the development of this important new approach to physics.

I grew up in a family of scientists. My father, Fred LaViolette, was a physicist and electrical engineer specializing in nuclear reactor engineering at the General Electric Knolls Atomic Power Laboratory (KAPL). My mother, Irene, was a chemist who had formerly worked at duPont. Before I was born, both had worked in Richland, Washington on the Manhattan Project. During my preschool years I was picking up on the ins and outs of the workings of nuclear reactors, getting a rudimentary understanding of nuclear decay and transmutation, nuclear cross-sections, and so on. Around the dinner table I would absorb all that he had to say about his research and engineering tasks at work, and as a youngster I asked him many questions. During the first years of my life, he was working on the breeder reactor project, an attempt to design a nuclear reactor that would produce more nuclear fuel than it burned up. Under the dictates of Admiral Rickover, this later evolved into a program to build the world's first sodium cooled reactor for powering a nuclear submarine. This was eventually installed in the U.S.S. Seawolf which operated successfully for many years.

My father's mentorship was a great stimulation for me, as was the experience of seeing the KAPL facilities first hand during a weekend public "open house". By the age of eight I was doodling nuclear reactor systems complete with their cooling loop, turbine, and generator. At the age of 10, I accompanied my father on a long train ride to Chicago to attend the March 1958 Atom Fair. While he sat in on technical lectures conveying the latest developments in nuclear power engineering, I would wander through the immense exhibit hall visiting one exhibit booth after another with their interesting displays and models. There I learned about rare earth elements, fuel rods, reactor core design, and such things. A few times, even poked my head into the highly technical slide talks. Being the only young fellow on the floor, I was soon approached by newspaper photographers who were looking for a story angle and were eager to get shots of me viewing the booths. The following days I found my picture appearing in two Chicago newspapers, my first ever press coverage. 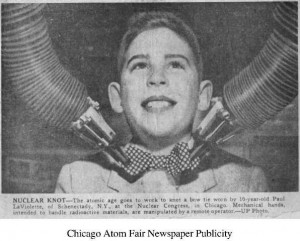