These findings are reason to be gravely concerned about the effects of a Galactic core explosion because they imply that the cosmic rays generated can impact our planet virtually without warning, accompanying the light arriving from the initial core outburst.(5, 11, 12) A study of astronomical and geological data reveals that a superwave from our Galactic core impacted our solar system near the end of the last ice age, 11,000 to 16,000 years ago.(13, 14) This cosmic ray event spanned a period of several thousand years and climaxed between 15,900 and 12,000 years ago. Although far less intense than the PG 0052+251 quasar outburst, it nevertheless was able to substantially affect the Earth's climate and energize the Sun. Data obtained from polar ice core samples show evidence of this cosmic ray event as well as other cosmic ray intensity peaks from superwaves impacting the Earth at earlier times (Figure 5).(11, 15) 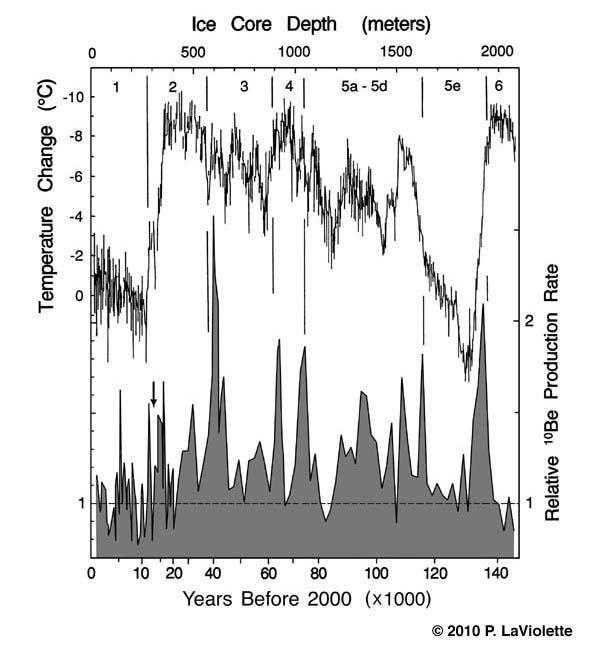 [An explanation of how this cosmic ray intensity profile was calculated from published beryllium-10 data is presented in the update to Dr. LaViolette's dissertation and in the appendix of a paper preprint available for download.]

Figure 6 shows the position in the Galaxy of the 15,900 years before 2000 (b2k) superwave when viewed at differing times following the time it passed through the solar system.(5) This elliptical shape of the event horizon is determined by the time it takes the cosmic ray electrons to travel radially outward from the Galactic center at the speed of light plus the time it takes the synchrotron radiation generated by those cosmic ray electrons to reach us at the speed of light. As the superwave expands outward through the galaxy with the passage of millennia, the ellipticity of its event horizon progressively decreases. LaViolette found that the cosmic ray intensity along this ellipsoidal event horizon shell fits the galactic radio background distribution better than any other previous cosmic ray model. He also found that supernova explosion dates coincided with times when the superwave was passing the progenitor star's location, suggesting that superwaves trigger these explosions.

Figure 6. A galactic coordinate map (polar coordinates) plotting galactic longitude versus distance from the solar system in kiloparsecs that views face down onto the galactic plane (sectioning the galaxy at 0° galactic latitude). The animation shows the event horizon as its position would appear to an Earth observer for various times following its initial passage. The event horizon appears as an ellipse with the Galactic center located at the upper focus and the Earth at the lower focus. Also shown are the positions of young supernova remnants.
© P. LaViolette 2011

The effects on the Sun and on the Earth's climate were not due to the superwave cosmic rays themselves, but to the cosmic dust that these cosmic rays transported into the solar system. Observations have shown that the solar system is presently passing through a dense cloud of cosmic dust and frozen debris associated with the North Polar Spur supernova remnant. This material is normally kept at bay by the outward pressure of the solar wind. But, an impacting superwave cosmic ray volley would have overpowered the solar wind and pushed large quantities of this material into the interplanetary environment. The Sun would have become enveloped in a cocoon of dust that would have caused its spectrum to shift toward the infrared. Radiation back scattered from this cocoon would have caused the Sun's corona and photosphere to inflate, somewhat like that observed today in dust-choked stars called "T Tauri stars.". In addition, the dust grains filling the solar system would have back scattered solar radiation onto the Earth, producing an "interplanetary hothouse effect" that would have substantially increased the influx of solar radiation to the Earth. These various solar effects caused atmospheric warming and inversion conditions that facilitated glacial growth which brought on ice age conditions. On occasions when the solar radiation influx to the Earth became particularly high, the ice age climate warmed, initiating episodes of rapid glacial melting and continental flooding.

Details of this scenario are described in the book Earth Under Fire,(12) in Paul LaViolette's Ph.D. dissertation,(16) as well as in a series of journal articles he has published.(6, 7, 13, 16­, 18) LaViolette's prediction that there is a residual flow of interstellar dust currently entering the solar system from the Galactic center direction was later verified by data collected from the Ulysses spacecraft and by AMOR radar measurements made in New Zealand.(18) For a listing of related theory predictions and their verification click here. 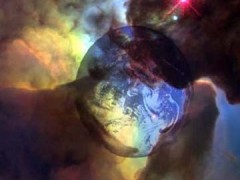 Artist’s conception of cosmic dust and gas present in the near Earth environment during the time of a superwave passage. In addition, the circumterrestrial dust cloud, not shown here, would have become particularly congested with cosmic dust. 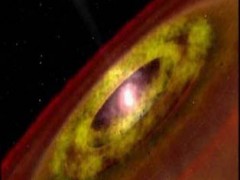 Artist’s conception of the circumstellar dust disc surrounding a T Tauri star. Similar dust congestion would have been present in our solar system during the time when the last superwave was passing us at the end of the last ice age.