The Frequency and Hazards
of Minor Superwave Events

Galactic Center activity occurs frequently between major superwave events. Astronomical observation indicates that during the last 6,000 years, the Galactic center has expelled 14 clouds of ionized gas.(21) See Figure 8 for dates. These outbursts may have produced minor superwave emissions with EMP effects comparable to those of major superwaves. About 80% of these bursts took place within 500 hundred years of one another (Figure 9). With the most recent outburst occurring 700 years ago, there is a high probability of another one occurring in the near future.

Figure 8. History of minor Galactic Center explosion activity during the past 6000 years; approximate dates when radiation pulses arrived from the Galactic Center. (These age estimates taken from Lacy et al. have been decreased by 70% to be consistent with the value of 7 kiloparsecs for the estimated distance to the center of the Galaxy.) 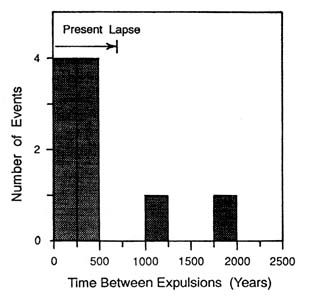 Figure 9. Amount of time between successive gas expulsions from the Galactic center, plotted as a frequency histogram.

At present little research is being done on this important astronomical phenomenon. Nor are we prepared should a Galactic superwave suddenly arrive. International channels of communication are not in place to deal with the disasters that a superwave could bring upon us.

[Does the Galactic Center Affect ESP Ability?]
Disclaimer: The synopsis of the superwave theory presented here should not be regarded as a complete presentation of this theory for the purpose of scientific debate on the internet. Those interested in a rigorous presentation of the theory and its supporting evidence should consult the update of Paul LaViolette's Ph.D. dissertation (available in CDROM format) and his various papers some of which are available for download at this website. His book Earth Under Fire is also a good resource but is written for a general audience and is not intended as the primary reference to rely on for scientific debate.
Next Page: References
Back to the previous page ...Continue to the next page