Steps that Should be Taken for Superwave Preparedness 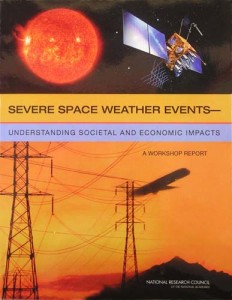 There is an over 90% likelihood that a superwave will arrive in the next 400 years, with a finite chance that one could arrive in the next decade. Currently, radio astronomers are monitoring the cosmic ray synchrotron radiation activity of the Galactic core on a daily basis. They report their findings regularly in IAU (International Astronomical Union) circulars. For the time being the Galactic core appears to be continuing in its quiescent state. However, it is possible that its level of activity could change in the blink of an eye. A superwave might arrive just as suddenly as a gamma ray burst. To prepare for this eventuality, an early warning system needs to be set up and a plan of action needs to be put in place. In this way, should there be signs of a significant core outburst and concomitant superwave cosmic ray arrival, the proper organizations around the world could be promptly notified so that the proper precautions are taken. In this way, the impact of such an event could be drastically reduced.

More public education is need to increase the general awareness about the phenomenon and its potential threat to the Earth so that ways might be found of minimizing the effects of a superwave should one arrive. More scientific papers need to be presented on research on this subject and media coverage of the subject is needed. Astronomical and geological research needs to be conducted to learn more about this phenomenon. For example, a more detailed analysis needs to be made of the concentrations of beryllium-10 and cosmic dust present in the ice age portion of the Earth's polar ice record which could be remnants of earlier superwave passages.

In regard to the superwave EMP problem, there is a need to develop an awareness about this phenomenon so that if it does occur, nations in possession of nuclear devices do not misinterpret it as an aerial nuclear detonation attack. Also there is a need to develop emergency plans to implement measures that will minimize the impact of a superwave's EMP on power and communications networks. Recently, the U.S. National Research Council made a step in the right direction by publishing a report entitled Severe Space Weather Events: Understanding Societal and Economic Impacts which describes hazards to modern society that could occur should we experience a large magnitude solar storm, similar to the 1859 Carrington event solar flare. The report is relevant from the standpoint of preparedness for a superwave hazard because many of the adverse effects it describes are the same as those that would occur during the arrival of a superwave, even one of relatively low magnitude. The Starburst Foundation had warned the National Research Council and other government agencies about such hazards in their 1989 public outreach project on superwaves. Efforts need to be made to develop and implement user based alternative electrical energy generators so that the factories, hospitals, offices, and residents can disconnect from the electrical power grid. The Starburst Foundation supports efforts to achieve this objective.

Next Page: Mass Prayer and Meditation
...Continue to the next page